How good is Queensland!

Thank you to the hundreds of members who travelled far and wide to attend the 2019 Convention.  With over 550 delegates in attendance and 74 policy resolutions debated, it was a testament to the energy and strength of our political movement.

Just over two months ago the Liberal National Party delivered a stunning result for Queensland and Australia.  It was your hard work that ensured the re-election of the Morrison-McCormack Government.  It was great to have Prime Minister Scott Morrison and Deputy Prime Minister Michael McCormack make the trip to Brisbane to thank members personally for the work you did. Special thanks  to the Deputy Prime Minister for spending three days with us.

Our State Leader, Deb Frecklington set out her priorities for the next twelve months and the seats we will be targeting to form a majority LNP Government in 2020.  This week we opened nominations in the seats of Aspley, Barron River, Gaven, Maiwar, Mansfield, Maryborough, Mirani, Mundingburra, Redlands, Townsville and Whitsunday.

Lord Mayor Adrian Schrinner spoke about the work his team is doing to build a better Brisbane, despite the deliberate obstruction by the Palaszczuk Labor Government.

Congratulations to Cynthia Hardy and Cameron O’Neil on their re-election as Vice Presidents, as well as Lenore Johnstone and Gary Spence on their appointment as Honorary Life Members.

A special congratulations to Don and Olwyn Connolly as the inaugural recipients of the President’s Medal.  Although Don was unable to be with us, Olwyn was good enough to share an anecdote about how Don dealt with GetUp in Dickson!

My sincere thanks to State Director Michael O’Dwyer and Events, Publications Coordinator Rebecca Docherty and State Secretary Angela Awabdy for the hundreds of hours they put in – including many sleepless nights and early mornings – to ensure Convention was a success.  Not to mention the entire team at LNP HQ and the many long-serving volunteers who assisted them.

All submissions will be treated confidentially. All members would have received an email this afternoon asking for feedback. The survey can be found here: bit.ly/2019-Review

Please ensure your voice is heard by making a submission. 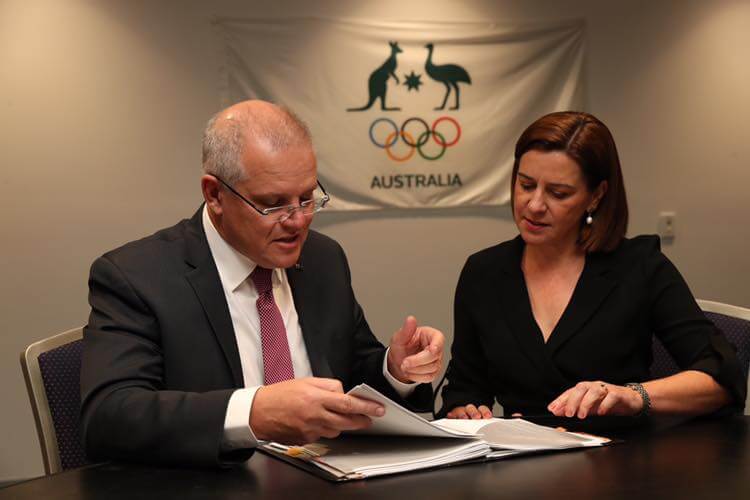 Leaders and members from across the state were brought together for the LNP Convention on the weekend.

The strength of our party comes from the grassroots and I enjoyed meeting as many members as I could.

I want to thank rank and file members for their spirited debate on the resolutions over the weekend.

I also want to thank David Hutchinson for running an outstanding convention and congratulate him on his election as president.

The convention clearly showed we have the energy and ideas to win next year’s election.

It’s a privilege to lead the LNP’s parliamentary team and I made some make some key announcements at the convention, including a vision to drought-proof Queensland once and for all.

I also announced the opening of nominations in a number of key seats we must win next year.

We will field outstanding candidates to represent every single electorate and show Queensland we are the only choice come October next year.

Queensland can’t afford another term of Labor and you only have to look at this week to see why.

Jackie Trad was caught out failing to declare ownership of a house just hundreds of metres from Cross River Rail – the very project she is in charge of.

I believe it wasn’t just contempt of Parliament – Jackie Trad showed contempt for the people of Queensland.

Jackie Trad would have known about the value increase or potential rezoning – this is akin to insider trading.

Then we learned Jackie Trad had failed to declare yet another property, this time a luxury unit in West End.

I challenged Annastacia Palaszczuk to show some leadership and refer the Treasurer to the Crime and Corruption Commission – and she failed to do so.

I referred Jackie Trad’s conduct to the CCC because there needs to be a full investigation into whether Jackie Trad used confidential government information for personal gain.

Queensland now has the second worst unemployment rate in the country under Labor and the jobless queue is more than 174,000.

As I discussed in my speech at convention, the LNP’s economic plan will create more jobs for Queenslanders – no matter where they live. Watch the speech here:

This week we revealed the statewide ambulance ramping rate had jumped to 25 per cent since November 2017 under Labor.

Queensland emergency departments are in crisis on Annastacia Palaszczuk’s watch and it’s patients who are paying the price.

On a lighter note, I want to say a big thanks Sam O’Connor for joining #Deb2020 volunteers for a successful night phone canvassing voters this week.

Our next canvassing night is coming up soon at HQ in Bowen St, Spring Hill.

If you can get involved, please email askdeb@opposition.qld.gov.au

Next week is shaping as a big week. The LNP will hammer Labor’s leaders in Estimates next week and hold them to account.

Nominations are now being called for delegates for the 2019 Australian Political Exchange Council (APEC) program.
The APEC delegations for 2019 are expected to be as follows:

Please note that dates given are tentative and are frequently subject to change. As well, it is sometimes not possible for a planned delegation to proceed and it may be cancelled.

The Council’s criteria for selection are that nominees:-

Those interested in applying to take part in any of these delegations should submit a brief c.v. and covering letter, marked to the attention of Bruce Edwards, International Secretary at the Federal Secretariat, to bruce.edwards@liberal.org.au by COB Friday 26 July 2019 .

Please also CC your application to State Director Michael O’Dwyer at the LNP at state.director@lnp.org.au .