EXPERIENCE AND LEADERSHIP FOR BRISBANE 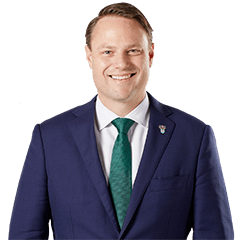 Brisbane voters have a very clear choice on March 28.

On one hand, you can Vote 1 for Team Schrinner if you want people with the experience and good judgement to run Australia’s largest council.

You can Vote 1 for Team Schrinner if you want people with ideas to ensure Brisbane just keeps getting better.

You should Vote 1 for Team Schrinner if you want the people who have balanced our $3.1 billion budget in the black for 16 years, and are promising to make it 20 years in the Black.

Or you could choose Labor, if you prefer a Council that’s all smears and no ideas – that’s more interested in muckraking and mudthrowing.

If you want a team that lacks the maturity and experience to keep the Budget in the black, then Labor are your people.

And you can choose Labor if you want a team with no plans for the future of our city.

The choice is that simple.

“Only Team Schrinner has the plans and experience to run Australia’s largest council.”

How to vote for Team Schrinner Our record of achievement

Team Schrinner has outlined plans to build five new green bridges, as part of our integrated plan for getting people home sooner.

Team Schrinner has also announced record investment in parks and green space.  That was all on day one. Since then, we’ve unveiled our plans to transform Victoria Park golf course into Brisbane’s version of Central Park.

And of course, work is now underway on the Turn-Up-And-Go Brisbane Metro, which will revolutionise public transport, get thousands of cars off the roads and make hundreds more buses available for our suburbs.

The first fully-electric Metro Vehicle will arrive this year, and construction is happening at Eight Mile Plains and at South Brisbane. On top of that we’ve introduced free off-peak travel for seniors.

We’ve cut rates for first home buyers, and for everyone else we’ve stayed well below the rampant rate increases that happened under Labor.

That’s our record of achievement, and we’re promising to keep Brisbane headed in the right direction.

Our promise to deliver

By 2031 we will secure 40 per cent of our city as natural green space.

We’ve allocated $23 million to plant and maintain trees across our suburbs.  This will protect important habitat for koalas and other wildlife.

We want Brisbane to become the Koala capital of Australia.

We’re also going to increase the number of jacaranda trees, which have become such an iconic part of Brisbane’s character.

We’re providing record support for festivals and cultural experiences, which pump $7.8 billion into the Brisbane economy each year.

We’re embracing our river, with new leisure and transport opportunities.

And we have a 20-year vision to transform the Oxley Creek Corridor into a world-class green, lifestyle and leisure destination. They have no ideas for the future of our city.  And they want to cancel our ideas.

It’s been five months since Labor installed their current Mayoral candidate, and he’s yet to come up with any positive plans for our city.

Our message to voters is “Don’t risk Condren”.

We live in one of the great cities of the world.  We’re getting better all the time, and we’re heading in the right direction.

And when you’re heading in the right direction, you don’t change course.  We need to keep going.

Only Team Schrinner has a clear vision for building the Brisbane of tomorrow:

Only team Schrinner has the experience, the good judgement and the proven track record to keep Brisbane heading in the right direction.

We need one more thing – we need your support.  A vote for me and my team on March 28 will let us continue our strong record of delivering for this great city. Disclosure Warning: Commonwealth and State legislation require disclosure of gifts to registered political parties. For more information about gift threshold amounts and reporting periods contact the AEC (13 23 26 or www.aec.gov.au) for information about Commonwealth obligations and ECQ (1300 881 665 or www.ecq.qld.gov.au) about State obligations.